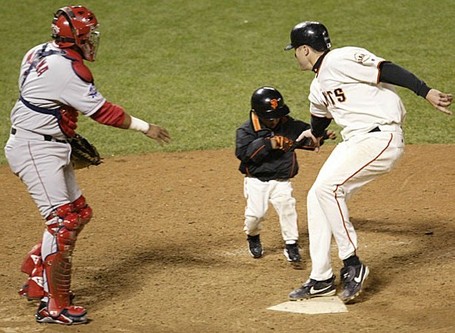 (Snow leads Baker to the dugout. Photo by Brian Bahr, Getty Images) 10/24/1985 - Spurs trade Gervin to Bulls The San Antonio Spurs trade George Gervin to the Chicago Bulls for Dave Greenwood. Gervin had led the league in scoring four times and would later be named one of the 50 greatest players ever. At the time, he had the highest career scoring average of any guard in history. That record was later broken by Michael Jordan, the Chicago shooting guard who he was now a teammate of. Gervin was not happy to leave San Antonio and played only one season with the Bulls before retiring. He played in all 82 games in the '86 season, started in 75 of them, and averaged 16.2 per game. Jordan missed all but 18 games that year due to a broken foot, but the Bulls magically snuck into the playoffs with a 30-52 record. In the postseason, they went out to the Boston Celtics in a series that included Jordan's 63-point game at the Garden. Gervin was one of several NBA legends who finished his career playing with Michael Jordan. Artis Gilmore spent a pair of seasons with Jordan before spending a year with the Boston Celtics, and Robert Parish, who stuck around long after Larry Bird and Kevin McHale, finished his career playing on Jordan's 96-97 championship team. 10/24/1999 - Gray interviews Pete Rose
Before Game 2 of the '99 World Series, Major League Baseball presented its "All-Century team." Thirty players were chosen to make up what would have been the greatest collection of talent in history. Every living ballplayer among the thirty was there, including Pete Rose, who had been banned from professional baseball since 1989. The Atlanta crowd offered him a deafening ovation at the announcement of his name; it had been years since he had stepped foot on a big league field.

Afterward, NBC sideline reporter Jim Gray cleared an interview with the all-time hit king. While Rose would admit it years later, he was at the time a steadfast denier that he ever bet on the game of baseball -- the allegation that had led to his lifetime banishment. Each of Gray's questions pertained to Rose's betting allegations: "Are you willing to show contrition, admit that you bet on baseball and make some sort of apology to that effect?" "You signed a paper acknowledging the ban. Why did you sign it if you didn't agree with it?" "Pete, those who will hear this tonight will say you have been your own worst enemy and continue to be. How do you respond to that?" Rose ended the interview by saying, "This is a prosecutor's brief, not an interview, and I'm very surprised at you. I am, really." Gray was roundly criticized for his interview. While most people familiar with the Dowd Report felt that Rose was lying, they didn't appreciate Gray's approach, and that he had veered headlines away from what was an unprecedented ceremony of the greatest players in baseball history. The USA Today wrote: "It became the Jim Gray Show, thanks to Gray's self-serving grandstanding in front of a national TV audience. Gray, who made himself part of the show, wanted to be the reporter who got Rose to admit he bet on baseball. He wanted to be the one who got Rose to apologize for his crimes against the game." In Game 3 -- of a series that the Yankees ultimately swept -- Yankees outfielder Chad Curtis hit the game-winning home run. As Gray caught up with Curtis to do a postgame interview, Curtis said "As a team, we kind of decided, because of what happened with Pete, we're not going to talk out here on the field." He then dedicated the home run to his grandma and walked away.

Curtis wasn't the only person unhappy with Gray. NBC was levied with thousands of complaints immediately after the Rose piece; Gray even received death threats and hate mail from it, although he found at least some redemption in 2003 when Rose finally admitted to betting on baseball. (Snow led him by his jacket. Photo by Kevork Djansezian, AP Photos) 10/24/2002 - Saved from the Bell

Six-time Gold Glove winner J.T. Snow made the best save of the '02 World Series, and he didn't even need his glove.

Dusty Baker, the San Francisco Giants manager, had allowed his son Darren to be the Giants' bat boy, even though he was only three years old. The Giants players, who had won all seven games Darren was in the dugout for, said he was a good luck charm and liked having him there.

His eighth game picking up bats was a bit more eventful than the other ones. It was Game 5 of the World Series and the Giants had just started to pull away from Anaheim. A Kenny Lofton triple sent Snow and David Bell rounding the bases. Just as Snow ran home, little Darren wandered over home plate to try to retrieve Lofton's discarded bat. With Bell charging the diamond, Snow hoisted the toddler by his jacket and lifted him to safety. Baseball officials allowed Darren to be the bat boy for games 6 and 7, but the following year, a rule was enacted restricting kids under the age of nine from being bat boys.

While the thought of a big leaguer sliding into a three year-old was scary, I seriously doubt David Bell would've slammed into him just to make it a 10-4 game. If common sense prevailed, Bell would've stopped short and forfeited the out. Then again... Bell was a steroids user, so who knows how good his judgment would have been.