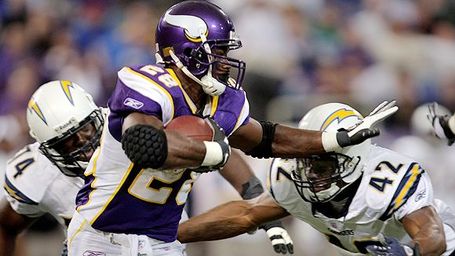 (Peterson runs against the Chargers. Photo by Doug Pensinger, Getty Images) 11/04/1994 - The Water Cannon Incident There are good ways to begin a year... and there are bad ones. The way the San Antonio Spurs began the 1994-95 season definitely fits in the second category. During the introduction of the starting lineups, an accompanying firework accidentally set off the sprinkler system at the Alamodome. A water cannon then began to spray the coaches, players and fans with 12,000 gallons of liquid over a four-minute span, drenching everyone around it and forcing the players to evacuate the court. The start of the game was delayed 50 minutes while workers stopped the flow of the cannon and removed the hardwood of excess water. Adding insult to injury, two members of the Republican National Convention site-selection committee were in attendance. "It was a technical malfunction," said Mike Abington, the Alamodome's director. "The response was shocking." "I couldn't believe what I was seeing," said Spurs coach Bob Hill. "You think you've seen everything, and then something like this happens." The game finally tipped off at 8:40 PM. David Robinson, who would win the MVP that year, scored 27 points and added 16 rebounds, six assists and five blocks. But the Golden State Warriors, led by 29 from Tim Hardaway and 27 from Ricky Pierce, made an already damp event worse, winning 123-118 and spoiling the Spurs' home-opener. 11/04/2007 - Pats beat Colts in battle of unbeatens When the New England Patriots visited the Indianapolis Colts in November 2007, the pregame hysteria was such that some were calling it "Super Bowl 41-and-a-half." New England had obliterated their first eight opponents of the season, leaving many to believe they'd go undefeated; meanwhile the Colts, who were also undefeated at 7-0, had beaten the Patriots three times in a row and represented the last reasonable obstacle in New England's quest for a perfect season. Few regular season games have ever been as hyped: it was Peyton Manning versus Tom Brady, Tony Dungy versus Bill Belichick, the Colts versus the Patriots -- the two best teams in the NFL, in a matchup that had produced a fantastic AFC Championship Game earlier in the year. It was also the first time that two teams with undefeated records had faced each other that late in the season.

The betting line for the highly-anticipated game was truly unprecedented. The Colts were the defending champs, 7-0, at home, and facing a team they had had recent success against. However, New England looked so infallible in their early games that the Pats were listed as six-point favorites anyway. Worsening Indianapolis' odds was Dungy's decision to sit star receiver Marvin Harrison, who had been a game-time decision with a bruised knee.

It didn't take long for the Colts to prove there was enough left of their championship squad to compete with the vaunted Patriots. For the first time that season, New England did not score on their opening drive, or in the first quarter. The Pats had clobbered all their opponents by at least 21 points, yet they left the first half with only a Randy Moss touchdown on the scoreboard.

Indianapolis wasn't doing much better offensively. Wideout Anthony Gonzalez went down in the first quarter and the Pats keyed in on tight end Dallas Clark, who had killed the Patriots ten months earlier in the AFC championship game. With few receivers to throw to, Manning struck gold near the end of the second quarter. Indy was on their own 27 with less than 30 seconds to go when Peyton found Joseph Addai for a routine dump-off. Addai sprinted to the sideline and made a final cut to the right to turn a low-reward catch into a 73-yard touchdown.

New England tacked on a field goal in the third, making the score 13-10 in favor of Indianapolis. In the fourth, Tom Brady's second pass of the quarter was intercepted by Gary Brackett, setting up the Colts with another touchdown. For Brady it was his second pick of the day -- as many as he had thrown through the first eight games. A Manning quarterback sneak later and the Colts were in complete control, leading 20-10 with 9:42 to go.

Then, as if a light switch was flicked on, the Patriots instantly regained momentum. It took just 98 seconds for Brady to shotgun his offense to a touchdown; the highlight was a 55-yard snatch from Randy Moss that quickly placed them in the red zone. The Colts averted disaster on their next series when Manning recovered the football after a Rosevelt Colvin sack. It forced them to punt the ball with still four minutes on the clock, giving Brady ample time to pull off a comeback.

On their next drive, Brady and the Patriots were successful on an even more spontaneous TD. 48 seconds and three passes were all that was needed to give the Patriots' their first lead of the second half, thanks to a score by fullback Kevin Faulk. Indianapolis had only one more drive the rest of the way, and their shot at a comeback dissipated when the ball was raked free from Peyton Manning and into the hands of Colvin. With that recovery, New England ran out the clock and prevailed, 24-20, to move to a franchise-best 9-0 start. The ratings for the matchup were nothing short of tremendous; with 33.8 million viewers and a Nielsen rating of 22.5, Colts-Patriots was the highest-rated overnight game in 20 years. The Colts, who everyone expected to meet up with the Patriots in the postseason, finished with a great record but lost in the divisional round to the San Diego Chargers. Meanwhile, the Patriots resumed their path to perfection with a 56-10 beatdown of the Buffalo Bills in Week 11. The Patriots continued to win and win, and covered spread as they did, which eventually rose into the mid-twenties. The Patriots had the spotlight of a nation on them as they continued to climb to a 16-0 record, and were at last able to finish with a perfect record after beating the New York Giants in Week 17. However, their regular season success did not translate in the playoffs, and the Patriots lost a thrilling Super Bowl to those same Giants in February 2008. 11/04/2007 - Adrian Peterson sets rushing record Adrian Peterson, just eight games into his career, has one of the greatest single-game performances of all time. At home against the San Diego Chargers, the Minnesota Vikings running back rushed for an NFL-record 296 yards, surpassing Jamal Lewis' total from 2003 by one yard. It marked the second time Peterson had rushed for over 200 yards in a game, a first for a rookie. "I know anything is possible," said Peterson, who would win the rookie of the year award. "That is why I continue to work on the things, working hard in practice like it's a game, and really, just keeping myself in shape and ready to go out and make things happen on Sunday." However, only an incredibly small portion of the country got to see Peterson set the record. The Chargers-Vikings game took place before the aforementioned Patriots-Colts game, which would draw the highest audience for a regular season football game in 11 years. With the Vikings holding a commanding 35-17 lead, and the Colts game about to begin, CBS -- who carried both games -- decided to shift the national audience to the beginning of the Pats-Colts game. While the decision by CBS was understandable, much of the country was deprived of seeing Peterson's 35 rushing yards in the final two minutes, nudging him past Jamal Lewis for the single-game record. But Peterson wasn't the only person to set a record in the Vikings-Chargers game. With four seconds left in the first half, and the score tied at seven, Vikings kicker Ryan Longwell attempted a 57-yard field goal; he missed, and Chargers cornerback Antonio Cromartie caught the ball at the very back of the end zone. Cromartie then proceeded to streak down the right side of the field, returning the ball a record 109 yards for the touchdown -- it was the longest play in the history of the NFL.