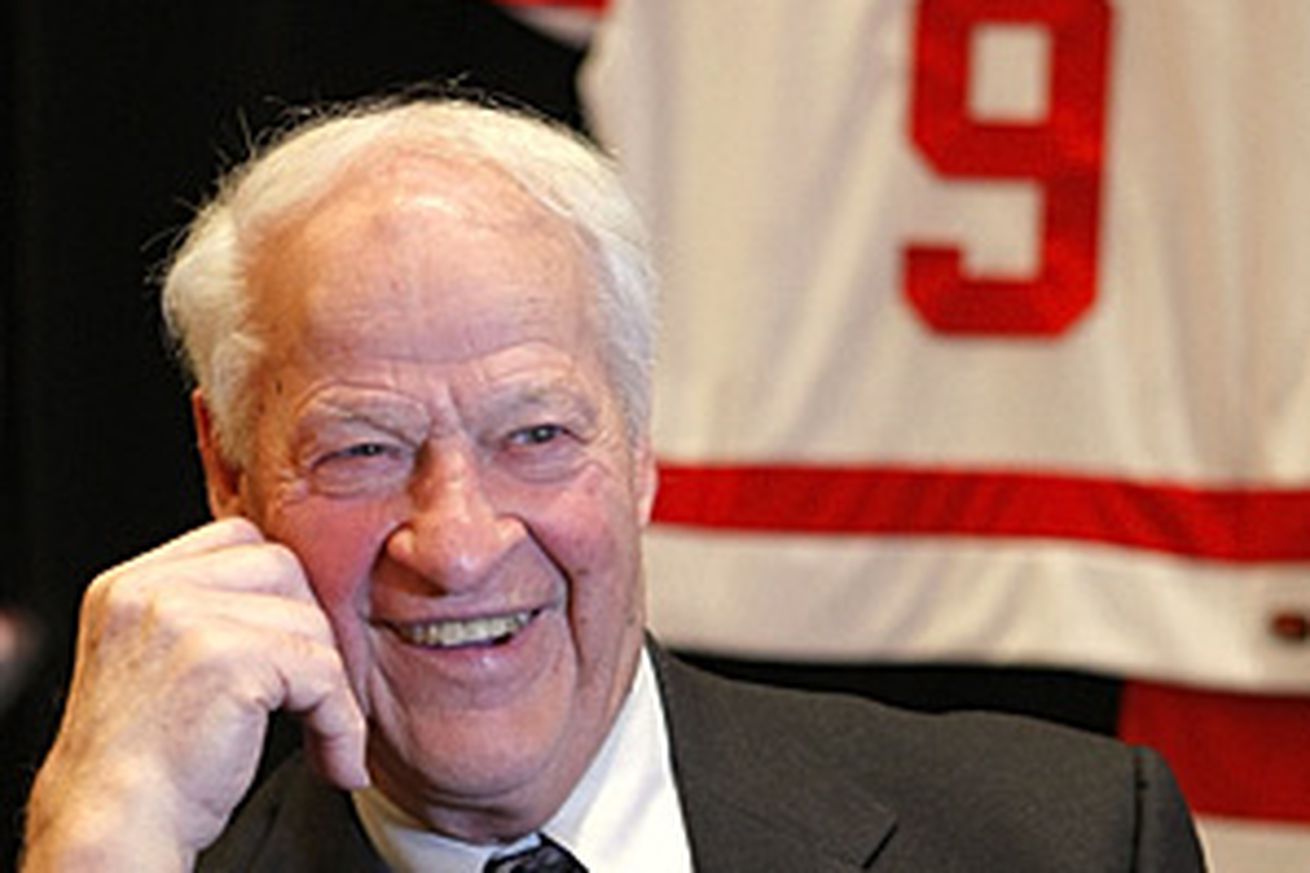 Gordie Howe speaks to the media during a commemoration of Red Wings greats in 2008. (Photo By Dave Sandford/Getty Images) 11/10/1963 - Howe sets scoring record With 15:06 to go in the second period, Gordie Howe of the Detroit Red Wings scores his 545th career goal, passing Maurice "The Rocket" Richard for the most in NHL history. Howe, who received a seven-minute ovation after getting the puck past Montreal goalie Charlie Hodge, had gone two weeks without scoring, and his quest to surpass Richard's record had begun to strain everyone on the team. Asked after the game what breaking the record felt like, Howe merely stated, "Now I can start enjoying life again." Howe would finish with 801 career goals, a mark that stood until 1989 when he was passed by Wayne Gretzky. Meanwhile, in the same game that saw Howe's record-breaking goal, Red Wings goalie Terry Sawchuk recorded his 94th career shutout, tying him with George Hainsworth for the all-time lead. Sawchuk eventually broke the record and finished with 103 career shutouts, a record stood until 2009, when it was surpassed by Martin Brodeur. 11/10/1964 - DeBusschere becomes youngest coach After getting off to a 2-9 start, the Detroit Pistons fire Charley Wolf and name third-year forward Dave DeBusschere player-coach. At only 24 years old, DeBusschere became the youngest coach in the history of the NBA and assumed control of a fledgling team that went 23-57 the year before. Later that night, DeBusschere earned his first career win when the Pistons defeated the Baltimore Bullets, 119-117. DeBusschere helped himself out by scoring 26. DeBusschere lasted until 1967, when he gave up the coaching reigns after nearly three complete seasons. His collective record was 79-143, and looking back years later, DeBusschere admitted it was "a big mistake" to give a 24-year-old player the responsibility of play-calling. "It was a relief to give up coaching," he once said in an interview. "I realize now there were things I wasn't mature enough to handle. As soon as I was back on my own again, I had my best season. I was scoring better, rebounding better, defending better, and doing everything else better." 11/10/1971 - Black Jesus traded to the Knicks

The Baltimore Bullets trade Earl "The Pearl" Monroe to the New York Knicks for Mike Riordan, Dave Stallworth and cash. Monroe, who was known on the playground as "Black Jesus," had been in a contract dispute with team management and had been sitting out since the middle of October while the team tried to deal him. Monroe was offered a substantial amount of money to join the Indiana Pacers of the ABA, but turned it down and was instead shipped to New York just a few days later. Monroe found integrating with the Knicks to be difficult. Not only had his Bullets faced the Knicks in the previous three postseasons, but the man Monroe had guarded in those series, Walt "Clyde" Frazier, was the team leader and the man he was now supposed to defer to. "It sure was strange playing with the Knicks after playing against them all these years," Monroe told the AP after his first game. "It's going to be good. Man for man, the Knicks have the best starting five in the NBA. And just being an addition makes me feel good." Monroe began by coming off the bench, but eventually gelled and played his way into the starting lineup. Frazier and Monroe played perfectly together and helped the Knicks capture the NBA title in 1973. Both would get their numbers retired and both were included on the NBA's list of the 50 greatest players of all time. More significantly, though, the union of Monroe and Frazier became the prototypical example that former rivals, both playing the same position, could get along and share the basketball -- even if it meant one player sacrificing shot attempts. "I knew it was Clyde's team," Monroe told the New York Times in 2004. "I wasn't going to come here and try and upstage Clyde. Most games in Baltimore, down the stretch it was my time to work, and here I knew it was somebody else's time. Sometimes trying to pull back my game was harder than playing the game." "People said we'd need two basketballs," Frazier said to NBA.com in 2010. "But they didn't know the mutual respect we had as opponents. ... We never trash-talked. ... So when he came to the Knicks, actually, the credit goes to Earl. Because I didn't have to change my game -- he had to change. He told everybody it was my team. He had to become a team player. He was no longer the focus of the offense. He had to play defense. To his credit, he did. That was the character of Earl Monroe.''