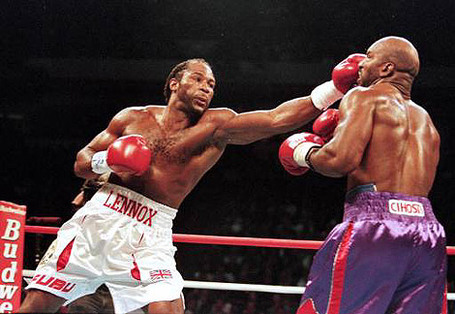 (Lewis punches Holyfield in the rematch. Photo courtesy of Getty Images) 11/13/1967 - Harkness hits epic shot Jerry Harkness makes his claim to fame. In an ABA game between the Indiana Pacers and the Dallas Chaparrals (AKA the San Antonio Spurs), the Pacers guard caught the ball 92 feet from the basket and hurled a desperation shot as time expired. To the amazement of everyone in the building, Harkness' trey found the bottom of the net -- and since the ABA had already enstilled the three-point shot -- it gave Indiana a 119-118 victory. "Everybody in the place was screaming," Harkness later said. "When it left my hand, all their players were jumping around because of (Charles Beasley's go-ahead shot with two seconds left). It hit the back of the backboard and went in. Everybody in the place just froze. Everybody was silent. Then our guys started jumping around, yelling and screaming. At first we were getting ready for overtime because the three-pointer was so new (in the ABA). Then we realized we'd won. "It never really got that much publicity. There was no video, no photos of it. Nothing." The shot was the only three-pointer Harkness hit that season. The Dallas Chaparrals painted a logo on the spot of the floor where he took it from. Officially measured at 92 feet, the shot still stands as the longest field goal in professional basketball. However, the length of the shot was later re-measured at 88 feet, and Harkness himself said that it was more likely an 88-footer than a 92-footer. This is important because in 2001, Baron Davis of the Charlotte Hornets hit an 89-foot shot, meaning that if Harkness' shot was only 88 feet, it's no longer the record holder. Harkness was also notable for hitting an enormous shot in the 1963 NCAA championship game. With four seconds remaining, he hit a 12-foot jumper that tied the game at 54 and set the game to overtime. In OT, his Loyola of Chicago Ramblers beat the Cincinnati Bearcats, 60-58. 11/13/1979 - Dawkins breaks first backboard Darryl Dawkins, "Chocolate Thunder," was known for his powerful dunks, and the best of all of them came in a game against the Kansas City Kings. 38 seconds into the second half, Dawkins caught a pass in the lane and slammed it down with two hands. Immediately, the glass backboard completely shattered and rained down on the unsuspecting players. Bill Robinzine, who was directly under the basket, was the only one who got hurt and only suffered minor cuts. "It wasn’t really a safe thing to do," Dawkins said, "but it was a Darryl Dawkins thing to do." Dawkins, who named several of his dunks, later called it the "Chocolate Thunder Flying, Robinzine Crying, Teeth Shaking, Glass Breaking, Rump Roasting, Bun Toasting, Wham, Bam, Glass Breaker, I am Jam." The Kansas City crowd gave Dawkins a standing ovation, though they tempered off after realizing that backboard -- without a single pane of glass remaining -- was unplayable. Finally, after an hour-and-13-minute delay, the game resumed with a new basket in place. Despite Dawkins' slam, the Sixers still lost, 110-103. Three weeks later, Dawkins broke another backboard -- this time at home in front of the Philadelhpia fans. After that, the NBA got tired of the lengthy delays the dunks were causing and ordered him not to do it again. (Dunk photo courtesy of Bettman/Corbis) 11/13/1999 - Lewis beats Holyfield following draw
After a much talked about and highly controversial draw, Evander Holyfield and Lennox Lewis meet in Las Vegas for a rematch of their heavyweight championship bout. Lewis won on all cards and became the first British heavyweight champion in a century. It was the last time these two men met in the ring, which is notable because both were cornerstones in Mike Tyson's turbulent career.

In a 131-95 road defeat to the Portland Trail Blazers, the Atlanta Hawks even managed to bore the official score keeper. At least that’s one explanation as to why Hawks center Cal Bowdler stayed on the floor beyond his 6th personal foul. Instead of being disqualified, Bowdler continued playing until he committed a seventh foul, which was incorrectly identified as his sixth. Bowdler left the game with two points and two rebounds in 15 minutes. But on review, it was later discovered that Bowdler had accidentally set the shot clock era record for fouls in a game.

Because the faux pas was discovered only after the game was over, the official box score from the game does not indicate that Bowdler committed more than six fouls. Nevertheless, Bowdler’s modern-day record is one that will probably never be broken. Prior to the shot clock though, two players committed 7+ fouls in a game (Don Otten with eight in 1949, and Alex Hannum with seven in 1950). Further reading: Wallace shot stirs memories [Rocky Mountain News]