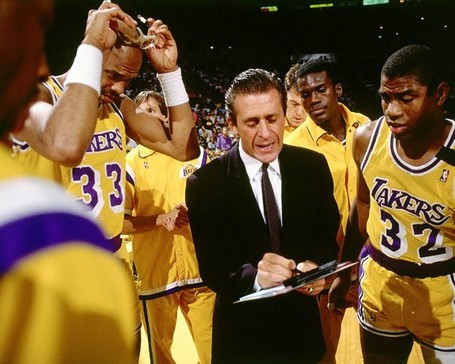 (Lakers coach Pat Riley. Photo by Andrew D. Bernstein, Getty Images) 11/19/1981 - Riley in, Westhead out The Los Angeles Lakers do the unthinkable and fire head coach Paul Westhead only 18 months after he  guided them to an NBA championship. The day before, Magic Johnson had stunned the media by demanding to be traded. Lakers owner Jerry Buss, who had given Johnson a colossal contract in the offseason, sided with his star player and exiled the coach, who Johnson complained was running the offense too slowly. Buss denied that Westhead's firing had anything to do with Johnson's trade request, though no one believed anything but the contrary. Filling Westhead's place was two people, oddly enough. Buss announced that assistant coach Pat Riley and Lakers consultant Jerry West would share the head coaching position, with West controlling the offense and Riley handling the defense. The dual-coaching appointment was quickly abandoned and Riley assumed complete control of the team within a few days. "It was just becoming a job," Johnson later said of his time under Westhead. "No high fives. No camaraderie. That was hurting me because that's what I'm all about -- having fun playing basketball. But the way the system was then, nobody was having fun. We were just four guys looking to pass in to one." It was a polarizing moment in the career of Magic Johnson. For a very short breath of time, the Lakers superstar might have been the most disliked person in the NBA. Fans and coaches alike hated his audacity in dispelling the head coach; Johnson was booed at home for the first month after the firing and the voters even kept him off the All-Star team. "Magic's appeal vanished with Westhead," wrote Dave Anderson of the New York Times. "Since the controversy, Johnson's smile hasn't changed. Neither has his skill. But his image has."

And yet... like most things in sports, results trumped everything. Riley did a phenomenal job with the Lakers and established himself as one of the greatest coaches of all time. With him at the helm, the "Showtime" Lakers became one of the highest-scoring teams in the NBA and seized the best record in the West. They won the NBA title that year and would win it again in 1985, 1987, and 1988. Seemingly overnight, Johnson went from a selfish prima donna to being labeled as the man who saved the NBA in the 1980's. Westhead, for his part, later took on the head coaching positions at Chicago and Denver and did poorly with both teams.
11/19/2004 - The Pistons-Pacers brawl In maybe the most damaging moment in the history of the NBA, Pacers' forward Ron Artest ran into the stands to confront a fan. The Pistons and Pacers both struggled after the melee, although the Pistons eventually got it together and returned to the NBA Finals. Artest was handed the largest suspension ever: 73 games.

To read more about this story, click here for an in-depth Inhistoric article: