There's no easy answer why the Miami Heat, the team some experts had winning 70 or more games, are off to a disastrous 8-7 start. Sure, Mike Miller and Udonis Haslem are big losses, but they shouldn't exactly need them to beat the Memphis Grizzlies or, particularly, the Indiana Pacers. After all, last year's Heat team beat the Pacers by 13, 34, 30 and 9 in the four games they played them, and that Heat team featured both Carlos Arroyo at point guard and Joel Anthony at center -- the two players who are now considered albatrosses on Miami's roster, and who some see as the prime reason they're unable to compete against the top contenders in the NBA. Miami's start flies in the face of conventional wisdom, that the union of LeBron James, Dwyane Wade and Chris Bosh would be anything but a potential dynasty. In Cleveland, James had managed to take a team with a mediocre supporting cast deep into the playoffs every single year. And while the Cavs never did win it all, few would say they weren't overachieving. But now James and the Heat find themselves in conjunction and, oddly enough, it's not working. Somehow, the Heat could beat the Pacers on the road by 9 with Arroyo, Wade and Anthony in the starting lineup, but in 2010, they couldn't beat them with LeBron James and Chris Bosh taking the place of Michael Beasley and Quentin Richardson. In fact they got destroyed... by 16... at home. Somehow, LeBron James is less successful with the help he's been dreaming of for seven years than he was with the Cavaliers, when arguably the second-best player on the team -- Zydrunas Ilguaskas -- is with him now in Miami. Most are reluctant to pin any of the blame on LeBron James since he's been by far the Heat's most consistent player. With 23.6 points, 8.3 assists, 5.3 rebounds and 1.7 steals a contest, it's hard to look at the two-time defending MVP as the reason they're off to such a horrendous start. But maybe it is. Maybe James isn't as similar to Michael Jordan or Magic Johnson as we thought, and that if anything, he's the second coming of Allen Iverson -- a great regular season performer who, for whatever reason, can't get it done in May and June. James is like Iverson in that he's at his best when the offense is completely centered around him, and that in order to be at his best, the ball has to be in his hands at all times. And like Iverson, James is having less success with more around him than he was when he had nothing at all, largely because he finds himself floating around the outside, waiting for the ball to be given to him instead of simply having it in his hands, like he's accustomed. 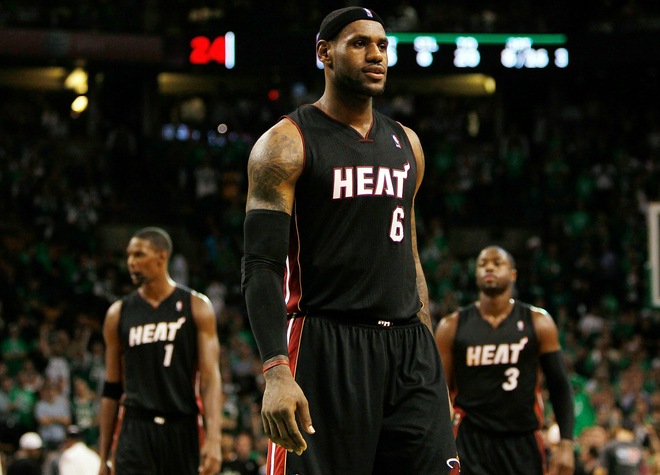