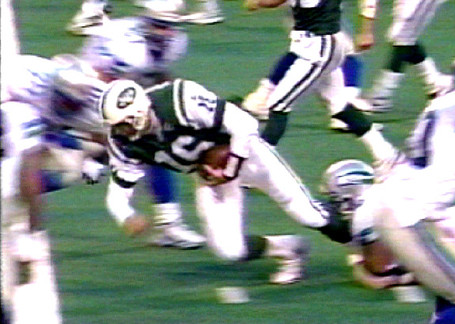 (Testaverde goes down well before reaching the end zone. Screen cap by CBS) 12/06/1979 - Dawkins breaks backboard again Three weeks after he broke a backboard in a game at Kansas City, Darryl Dawkins does it in front of the hometown fans in Philadelphia. Unlike his first backboard-breaking dunk, which left the rim intact, Dawkins' ferocious slam tore the rim completely off. This time, only a small chunk of the backboard came out, though the rest of the glass was completely shattered. Dawkins received a standing ovation, however it forced a 72-minute delay for the hoop to be replaced. "It was the power, the chocolate thunder," Dawkins said after the game. "I could feel it surging through my body, fighting to get out. I had no control over it." At that point, NBA commissioner Larry O'Brien stepped in. While breaking the backboard was an exciting thing for the fans to see, it wasn't safe to have shards of glass spattering at the players. Even worse, both of Dawkins' dunks had paused the game by over an hour -- which was something that no one wanted to see. A few days later, O'Brien ruled that breaking the backboard would result in an automatic fine and suspension. "A continuous of this activity can have horrendous results," O'Brien said. "We've been fortunate that a serious injury has not yet occurred. We decided -- by God, let's act now." Dawkins, who would never do it again in an NBA game, said he had no problem with the ruling. "The commissioner is the police," he said. "He makes the rules; I've got to abide by them. After seeing the scratches from the glass (from the shattered backboard) made in the floor, I think I'll cool it for a while. ... I just don't know my own strength. I may have to try to dunk with a little less authority." Thanks to Dawkins, the NBA later installed breakaway rims that made shattering the glass virtually impossible. 12/06/1998 - Testaverde's TD robs Seahawks With 27 seconds left in an important Week 14 showdown, the New York Jets were on fourth-and-goal from the 5-yard line. The 6-6 Seahawks had a slim 31-26 lead and were trying desperately to stay in the race for the final wildcard spot. Meanwhile, the 8-4 Jets needed a win to stay even with the Miami Dolphins atop the AFC East. With the game (and possibly the season ) in the balance for both teams, Jets quarterback Vinny Testaverde sensed a hole in the Seahawks' defense and attempted a QB sneak to potentially win the game. Testaverde's instincts proved to be accurate; with just 20 seconds remaining, Testaverde got close enough for Ernie Frantz, the line judge, to rule it a touchdown. The Jets miraculously pulled off a 32-31 win, eliminating the Seahawks from postseason contention. It was ironic that Testaverde won it with his feet, since he had thrown a career-high 63 pass attempts in that game. There was a problem though. Television replays showed that not only had Testaverde not made it into the end zone, it wasn't even close. CBS' cameras made it painfully clear that Vinny went down almost a full yard shy of the goal line. However, the NFL was without the luxurary of instant replay, and with no way to correct the call, the Jets walked away with a win they shouldn't have had. Not only was it an obvious mistake, it was an enormous one as well. The Seahawks would finish only a game behind the New England Patriots for the final playoff spot, while head coach Dennis Erickson was fired after the season. The error came on the heels of two other controversial calls that had happened just in the last few weeks. On Thanksgiving, referee Phil Luckett -- who was on the field in the Testaverde game -- seemed to mistakenly give field position to the wrong team in overtime, leading to a contested victory for the Detroit Lions. A few days later, the Patriots had won a game over the Buffalo Bills thanks to a pair of calls that extended their game-winning drive -- one of them was a completion on fourth-and-9 that should have been overturned since the receiver was clearly out of bounds. The Testaverde error was the straw that broke the camel's back. With increasing uncertainty over the league officials, the owners voted 28-3 to reinstitute instant replay in 1999. The league had previously used it from 1986 to 1991, but the technology wasn't good enough and teams were using it to the point that it disrupted the flow of the game. After several years of complaints from players and fans, instant replay was disbanded. The league's second forray with instant replay proved to be much more beneficial. The NFL limited teams to only a certain number of challenges a game and penalized them a timeout if the challenge didn't overturn the call. Plus the advancements in video replay had made it far more acceptable to people on the sidelines and rarely lasted more than a few minutes. Just a few years into the experiment, it was clear that instant replay was there to stay -- paving the way for the NBA, NHL and MLB to follow suit. 12/06/2002 - Lakers erase 27-point fourth quarter deficit Down by 27 to begin the final period, and down by as much as 30 overall, the Los Angeles Lakers come back to beat the Dallas Mavericks, 105-103, and do it in front of a national TV audience on ESPN. After playing awful the first three quarters, L.A. played a nearly-flawless final period, outscoring the Mavs 44-15. After missing the first shot of the fourth, the Lakers made 16 of their final 17 shot attempts, while Kobe Bryant, who had scored only six coming into the fourth, scored 21 points in the period and hit the game-winning turn-around jumper with 8.4 seconds to go.

"We could have easily just rolled over, and I don't think anybody would have really been too surprised at that because we've been playing so bad,'' said Bryant. The Lakers, the winners of the last three NBA Finals, were struggling since Shaquille O'Neal had missed the first twelve games of the season. "It shows the heart of a champion still beats inside of us. We're fighters.'' "This is indeed one of the toughest losses I can remember as a coach,'' said Dallas coach Don Nelson. "We don't normally lose games when we're ahead. This is an exception to the role by an exceptional team.'' The Lakers' 28-point halftime comeback was second only to the Utah Jazz's 34-point halftime comeback against the Denver Nuggets in 1996. The 27 points was also the second-largest 4th quarter comeback, one shy of the Milwaukee Bucks, who beat the Atlanta Hawks in 1977 after trailing by 28 in the fourth.