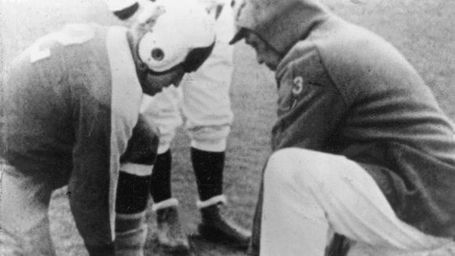 (The Sneakers Game. Photo courtesy of Pro Football Hall Of Fame/Getty Images) 12/09/1934 - The Sneakers Game
The Chicago Bears were leading the New York Giants 10-3 at halftime of the 1934 NFL Championship Game. It wasn't looking good for New York. Not only were the Bears undefeated, they had already beaten the Giants twice in the regular season. And with the playing surface at the Polo Grounds having completely frozen over, it was unlikely they were going to pull of the upset.

Then, Giants coach Steve Owen made a brilliant decision. He ordered his team to switch from leather cleats to rubber-soled basketball shoes, believing that it would give his players better traction on the slippery ice. It worked to perfection, and the Giants raffled off 27 unanswered points in the fourth period, while the Bears were incapable of mounting a comeback. The Giants won 30-13 to win their first of three titles in the pre-Super Bowl era. 12/09/1970 - Warren shoots at opposite hoop John Warren of the Cleveland Cavaliers commits an error that a lot of people did when they were kids: he shot at the other team's basket. The Cavaliers won the tip to start the fourth period, and Bobby Lewis passed it to Warren, who then streaked to the opposite basket and laid it in. Because the NBA does not assess negative points, the basket technically went to Leroy Ellis of the Portland Trail Blazers, who had actually tried to block the shot. Ellis was the beneficiary since he was the closet man to the basket. "I thought I had a basket," Warren told The Cleveland Plain Dealer. "When I heard the whistle, I thought I had been called for traveling or something." Shooting at the other team's basket is as good a metaphor as there is for the ineptitude of a basketball team. It was certainly applicable to the 1970-71 Cavaliers, who went a disastorous15-67 -- seven games worse than the next-worst team. Cleveland coach Bill Fitch, in a five-out-of-five quote, described what it was like coaching the worst team in the NBA: "I'm not an optimist even when I've got more bullets than the other guy," he said a week after the loss to Portland. "But we went to Milwaukee to play the Bucks and the weather was so bad only one plane got there all day... ours. I've been preaching ball-handling, so there's no way to get in trouble defensively if we have the ball. So last week against Portland we win the tip and Johnny Warren lays the ball in the wrong basket. Most teams hold up one finger to indicate a set play. We hold up a finger to point which direction we're going." (Kermit Washington punches Rudy T. Snapshot from ABC TV) 12/09/1977 - Washington punches Rudy T. In of the most gruesome incidents in sports history, Kermit Washington pulverizes the face of Rockets forward Rudy Tomjanovich. The Los Angeles Lakers and Houston Rockets had gotten into a fight, with Washington tussling with Rockets center Kevin Kunnert; when Washington saw Tomjanovich out of the corner of his eye, he instinctively turned and punched him in the face. The hit had a devastating effect on Tamjanovich, who collapsed to the ground in agony. The crowd instantly fell silent as Tomjanovich lay in a pool of his own blood.
"I saw him coming and I just swung," Washington said. "I had no idea who it was. Now that I've talked to other people, I understand Rudy wasn't going to fight. He's never even been in a fight. It was an honest, unfortunate mistake."

"Because of my concern for Kevin [Kunnert] my full attention was on him," Rudy recalled in 1979. "The next thing I remember was lying on the floor. There was a buzzing in my ears. I remember thinking that the scoreboard must have fallen on me."

The punch, which Houston coach Tom Nissalke described as "the most malicious thing I've ever seen in basketball," nearly killed Tomjanovich. It broke his nose, fractured his skull, damaged his teeth, and leaked blood and spinal fluid from his brain. Tomjanovich missed the rest of the season and was later awarded $3.2 million in a suit against the Lakers. He eventually made a complete recovery and returned to the NBA the following season.

Washington was given a $10,000 fine and a 26-game suspension, then the longest reprieve in the history of the NBA. He struggled to move past the incident and spent the remainder of his career labeled as the man who punched Rudy Tomjanovich. Years later, Washington started several charitable organizations intended to help the people of Africa. By then, Tomjanovich said he felt no ill will towards him and even meet with him in person when John Feinstein wrote a book about them: The Punch. "If I want to dwell on hatred and resentment and self-pity and being a victim, it's just self-destructive," he explained. "I believe having hatred and resentment is like taking poison and expecting it to hurt the other person. This is the only way to get rid of that poison. I chose to sincerely forgive. This is living it." (Hampton being handed his Rockies uniform. Photo courtesy of AP Photos) 12/09/2000 - Rockies sign Mike Hampton

Desperate to turn around their struggling franchise, the Colorado Rockies sign left-handed pitcher Mike Hampton to a gargantuan eight-year, $121 million contract. Hamtpon had several excellent with the New York Mets, including a 22-win season in 1999. At the time, Hampton was the highest-paid player in baseball, although he would lose that status less than a day later, when A-Rod was given an even huger deal.

Unlike Alex Rodriguez, Hampton did not earn the money. In fact, his deal with the Rockies may go down as the worst free agent signing in the history of baseball. Hampton was stellar at the plate, even winning the silver slugger award, but he was awful on the mound. Hampton spent two years in Colorado, accruing a 21-28 record with a 5.27 ERA -- not at all what the Rockies were expecting when they made him the richest pitcher in baseball.

In 2002, the Rockies traded Hampton and Pierre to the Marlins, who in turn passed him off to the Atlanta Braves -- making Hampton one of the only players to be on three different rosters in the span of three days. Hampton wasn't terrible when he pitched for the Braves, however he was so hampered by injuries that he missed the entire 2006 and 2007 seasons. From 2005 to 2008, in the final four years of his contract, Hampton made roughly $60 million. In those years, Hampton pitched in only 25 games, compiling an 8-7 record and a 4.21 ERA.

As if signing Hampton wasn't bad enough, the Rockies had also inked left-hander Denny Neagle to a five-year, $51 million deal the week before. Neagle lasted three seasons with the Rockies, going 19-24 with a 5.57 ERA. Not only was he terrible, and not only did he miss the entire 2004 season due to injury, Neagle was caught with a prostitute only a few days after he had been arrested for driving drunk. The incident ruined his marriage and allowed the Rockies to cut him without paying the final year of his contract.

In other words, the Colorado Rockies did not spend wisely in the 2000 offseason.

The Notre Dame Fighting Irish replace former coach Bob Davie with Georgia Tech coach George O'Leary. O'Leary, who had signed a six-year extension with the Yellow Jackets just a year earlier, expressed his desire to improve on the team's lackluster 5-6 record. "Notre Dame is the only job I would ever leave Georgia Tech for," O'Leary said in his introductory press conference. "It's the pinnacle of all coaching jobs. In fact, I believe there are two great coaching jobs in all of sports, one being the manager of the New York Yankees and the other being the head football coach at Notre Dame."

It wasn't to be. Union Leader columnist Jim Fennell was writing a feel-good story about O'Leary when he discovered discrepancies in his resume. Among the lies was that O'Leary earned a master's degree at New York University-Stony Brook, when not only hadn't he, there was no such thing as an NYU campus at Stony Brook. Nor did he earn three letters as a football player at New Hampshire, when in fact he had never even played in a game. His faulty biography was in use even as far back as 1980, when he took on the job at Syracuse.

O'Leary, who had been hired as the guy who would turn Notre Dame around, suddenly had the reputation of a pathological liar. "Many years ago, as a young married father, I sought to pursue my dream as a football coach," O'Leary said in a statement. "In seeking employment, I prepared a resume that contained inaccuracies regarding my completion of course work for a master's degree and also my level of participation in football at my alma mater. These misstatements were never stricken from my resume or bio sketch in later years." He resigned just five days after getting hired. That opened the door for Tyrone Willingham, who become the school's first black coach a few weeks later. 12/09/2004 - McGrady scores 13 in 35 seconds

With less than a minute remaining, the San Antonio Spurs had a 74-64 lead over the Houston Rockets. Rockets guard Tracy McGrady then came to the rescue, knocking down several three-pointers in about half-a-minute -- all of them well-contested, and one of them for a four-point-play.

With 11.2 seconds left, the Spurs still had an 80-78 lead with 11.2 seconds left. Brent Barry inbounded the ball to Devin Brown, who should've held the ball and waited to get fouled. Instead, he tried making a baseline drive and wound up losing the ball. McGrady came up with it and ran down the other end, as they were out of timeouts and couldn't call a play. With just 1.2 seconds left on the clock, McGrady drained another tough three, his fourth in the last 35 seconds, to give the Rockets an improbable one-point lead. The Spurs' final desperation shot was off, and the Rockets mobbed McGrady at the center of the court.

There may not be a better garbage time comeback. Although it happened in the regular season, it came against the team that would win the NBA championship, while McGrady had a stellar defender in Bruce Bowen guarding him. Amazingly, the Rockets scored just 10 points the first eleven minutes of the fourth quarter; they scored 18 in the final minute.