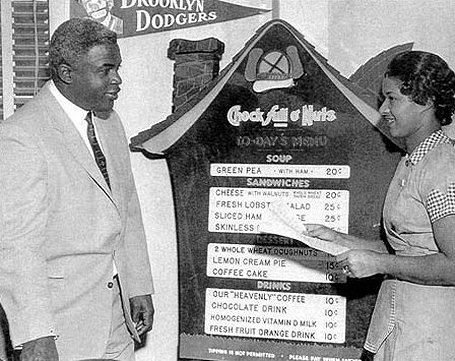 (Jackie Robinson. Photo courtesy of Chock Full o'Nuts) 12/13/1956 - Jackie Robinson traded to Giants
The Brooklyn Dodgers do the unthinkable and trade Jackie Robinson to their crosstown rivals, the New York Giants, for Dick Littlefield and $30,000. Robinson had broken the baseball color barrier in 1947 and helped the Dodgers go from the bums of baseball to a consistent contender in the National League. But he was 37 years old and was in the twilight of his career.

Robinson was leaning towards retirement when he heard the news. He did not want to start anew with a different team, but he didn't want to disappoint his die-hard fans, who cried for him to remain in the game. The Giants offered him $60,000 to stay active and play first base for them. But Dodgers VP Buz Bavasi hinted that Robinson was prolonging his decision to make more money; upon hearing this, Robinson immediately announced his retirement. "I wouldn't give them the chance to tell me 'I told you so,'" Robinson wrote in his autobiography.

Jackie announced his exit that January, rescinding the trade and sending Littlefield back to the Giants. He then signed a deal to become the vice president of Chock Full o'Nuts, a local New York lunch counter. (Denver's scorecard of the record game. Photo via NBA.com) 12/13/1983 - Highest-scoring NBA game In the highest-scoring NBA game of all time, the hometown Denver Nuggets etch out a 186-184 victory over the Detroit Pistons in triple overtime. There were 251 shots, 142 field goals, 32 ties, 19 lead changes, and very, very little defense. Isiah Thomas scored a career-high 47 points, dished out 17 assists, and played a game-high 52 minutes; John Long and Kelly Tripucka added 41 and 35 for Detroit, while Terry Tyler and Bill Laimbeer chipped in with 18 and 17. Kiki Vandeweghe led Denver with 51 points (on 21-29 shooting) while Alex English scored 47, including 17 in the fourth quarter. Dan Issel, who later coached the team, also scored 28. "In one word, unbelievable," said Tripucka, who scored all 12 of Denver's points in the second overtime. "You couldn't write a book with a better script. After this game, both teams deserve a week off. It seemed like we played three games." "This is the first, and I hope last, game I play that's anything like this one," Long said. "That's just too long to play basketball. And certainly, if we had lost, it would have been extra tough to accept." It made perfect sense that the highest-scoring game would take place in Denver, where a multitude of scoring records were set in the 1980's. Nuggets coach Doug Moe took advantage of the team's high altitude by ordering his team to play as fast as possible, with almost no regard for defense, so as to tire the other team out. As a result, the team was the best offensive team in the league and was also the worst defensive team in the league. Almost a month later, the Nuggets defeatedthe San Antonio Spurs, 163-155, with no overtimes. "Before the game, I told Doug Moe that we should make it the first team to 140 would win the game," said Detroit coach Chuck Daly. "Little did I know how prophetic that would be. They usually say the first to 100 will win the game. But in this game, that happened in the middle of the third quarter." At halftime it was 75-75 and at the end of regulation it was 145-145. Besides the single-game records set by the scoring total, a record number of assists (93) and baskets (142) were also recorded, as was the number of players (five) who scored 35 or more. In the end, if you like high-scoring games, then this was the game for you. Further reading: The Big Score [ESPN Page 2]