12/19/1999 - Brown blinded by flag
In one of the final games of the year, Browns tackle Orlando Brown was hit with a penalty flag in the worst possible place: his eye. Referee Jeff Triplette, who threw the flag, quickly came over and removed it from his helmet. The flag was reportedly filled with BB pellets to make it throwable and was improperly weighted; the damage it caused to Brown's right eye was serious.

Brown, whose father was blind from glaucoma, instantly became concerned with the condition of his eye. In his panic/rage, Brown raced back from the Cleveland sideline and back onto the field, where he shoved Triplette to the ground.

"Whatever hit me, it wasn't BBs," Brown insisted. "It might have been a lead fishing weight, something solid with a jagged edge that put four tears in my iris. Maybe it was a nut. But it wasn't BBs. The doctor said that when I got to the hospital."

The NFL suspended Brown indefinitely, making it the first time a player had ever been suspended for contacting a referee. Most sports writers were ready to run Orlando out of town, however when the severity of his injury was disclosed, it put his reaction in a whole other context. Brown's eye was bad enough that doctors feared he would lose sight altogether. The NFL dropped its suspension, though it hardly mattered; Brown's vision was too blurry for him to play football anyway.

Cleveland released Brown from his contract less than a year later. At the time, Brown had the largest contract of any lineman in history: six years, $27 million. While he still collected the $7.5 million signing bonus that came with it, the rest of his million were forfeited due to the NFL's lack of guaranteed contracts.

Brown sued the NFL for a whopping $200 million, citing that his impaired vision cost him future endorsements and the remnants of his Pro Bowl career. He was awarded a $15-20 million settlement. Brown's eye recovered shortly thereafter and he signed with the Baltimore Ravens in 2003. The NFL in turn sued Brown for $500,000 on the basis that the settlement prohibited him from returning to the league. The case was later dropped. 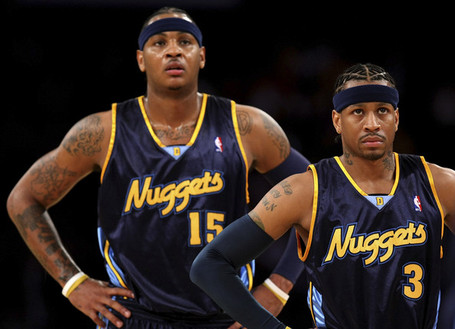 (Anthony and Iverson worked... but not on a competitive level. Photo by Stephen Dunn, Getty Images) 12/19/2006 - Iverson heads to Denver Allen Iverson's decade in the city of brotherly love comes to an end, as the Philadelphia 76ers trade him to the Denver Nuggets for Andre Miller, Joe Smith and two first-round draft picks. Iverson hadn't played in any of the Sixers' games lately, as the team searched desperately for a new location for him. After 11 years, Iverson had demanded a trade and the team, in full rebuilding mold, was ready to meet his demands. At one point, a deal was in place that would have sent him to the Charlotte Bobcats; but Iverson turned it down, saying he wanted to go to a contender. "I'm very happy about the trade," Iverson said in a statement. "Denver's style of play fits my strengths. I'm looking forward to playing with Carmelo, the rest of the Denver Nuggets, and for George Karl, who is a proven winner." In acquiring Iverson, the Nuggets possessed the No. 1 and No. 2 scorers in the NBA. The league's leading scorer, Carmelo Anthony, had just been handed a 15-game suspension for his part in a brawl against the New York Knicks. It was assumed that had Anthony not been suspended for such a length of time, the Nuggets may not have pulled the trigger for Iverson. There were immediate concerns about whether Iverson and Anthony could co-exist, particularly on a Denver team that already had Kenyon Martin and J.R. Smith. But the two got along fine and had no trouble divvying the points between them. But while Iverson made Denver slightly better than they were before, the Nuggets remained an awful defensive team. And though Iverson gave them a boost in the scoring, they found that Miller's passing ability was greatly missed. Denver made the postseason in 2007 and 2008 but went out in the first round both times. In 2008, the Nuggets traded Iverson -- who had only a year left on his contract -- to the Detroit Pistons -- who wanted to shake things up -- for Chauncey Billups. Iverson's one season in Detroit was a bad one, as the Pistons went from an Eastern Conference contender to the No. 8 seed. Denver, meanwhile, won 54 games and advanced to the conference finals, where they lost to the Lakers in six games.