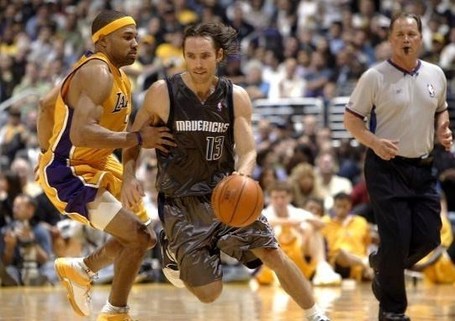 (Nash drives on Derek Fisher. Photo by Jeff Gross, Getty Images) 10/28/1973 - Smith blocks 17 shots Gail Goodrich scores 49 points as the Los Angeles Lakers beat the Portland Trail Blazers, 111-98. But the real story was Lakers' center Elmore Smith, who blocked an NBA-record 17 shots. Oddly enough, Smith's block brigade took place during the first month of the first year that the league started keep track of blocked shots. Years and years later, the record hasn't even been challenged, and probably never will. 10/28/2003 - Enough with the silver The Dallas Mavericks kicked off the 2003-04 season with the unveiling of their new alternate uniforms. Dallas looked pretty awful that night, and it wasn't just their 109-93 loss to the Lakers.

The Mavs' silver jerseys caught the ire of everyone and were banished just a game after its introduction. The issue wasn't the gray as much as it was the glare. The jerseys had been designed by Nike to shimmer, which was supposed to give them a more metallic appearance. Instead, Antoine Walker and Steve Nash looked they were wearing satin under the lights of the Staple Center. Dallas didn't have to dump the unis all together -- they could have just taken out the shininess and let the gray jerseys stay. C'est la vie. What's funny is that for years, any time you see a photo of Nash on the NBA page at ESPN.com, it was always of him in the silver uniform. Of all the photos to choose from, they chose to represent him wearing the one-game jersey. At least the silver jerseys weren't as bad as those light-green monstrosities the Atlanta Hawks wore in the 70's. Now those were ugly.