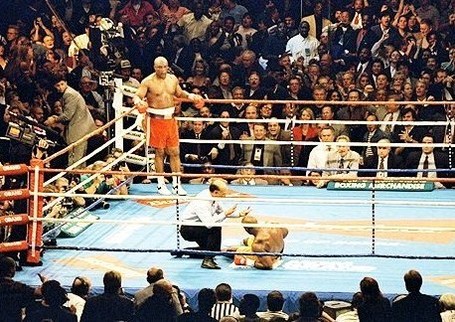 Chuck Connors of the Boston Celtics becomes the first player in professional basketball to shatter a backboard, which does during warmups. Unlike most occurrences of a backboard breaking, which usually happen after a ferocious dunk, Connors attempted a shot that hit the front of the rim. The glass backboard had been improperly installed and cracked without the ball even hitting it.

You would be hard-pressed to find a basketball player with a more unique resume than Chuck Connors. Besides playing briefly in the NBA, he later played with the Los Angeles Dodgers and the Chicago Cubs -- becoming one of the only athletes to play in the both the NBA and MLB. He was also drafted by Chicago Bears of the NFL but never played for them.

But Connors would be best remembered as an actor, particularly as the lead role in the hit western show, The Rifleman. In one episode, former Dodgers teammate Duke Snider played the role of an outlaw gang member.

For the first time, a Major League Baseball player is traded for a manager. The Oakland Athletics trade manager Chuck Tanner to the Pittsburgh Pirates for catcher Manny Sanguillen and $100,000. The deal wound up being one of the best trades ever made by the Pirates -- Tanner managed the team for the next ten years and even led them to a World Series title in 1979. On top of that, Sanguillen left the A's after one year and wound up finishing his career with the Pirates.
11/05/1994 - Foreman wins with blast from the past

George Foreman, a few weeks from turning 46 years old, stuns the sports world with a win over Michael Moorer in the heavyweight championship bout. Foreman hadn't boxed in over 17 months and was chosen to face Moorer mainly because of his name -- with Mike Tyson, Tommy Morrison, and Evander Holyfield unavailable due to losses and other extracurricular offenses, Foreman was the biggest profile available.

No one gave the 45 year-old a snowball's chance in hell to win. He hadn't claimed the heavyweight title since he lost to Muhammad Ali, and that was 20 years ago. Now he was facing a man who was younger, quicker, stronger, and the holder of an undefeated 35-0 record.

But the calm, confident Foreman had everybody fooled. Wearing the same orange trunks that he wore against Ali 20 years ago, Foreman was losing badly on all cards going into the tenth round. It was in that stanza that Foreman flipped a switch, throwing one mighty punch at the jaw of Moorer. The prohibitive favorite toppled to the ground, sprawling backwards onto the canvas. Moorer was given the ten count and to the amazement of everyone in the building, Foreman was the champion.

"Anything you desire, you can make happen," he said afterward. "It's like the song, 'When you wish upon a star your dreams come true.' Well, look at me tonight." For Foreman, it vindicated everything that had happened to him. He retired in disgrace in 1977 with his invincible image permanently shattered by Muhammad Ali; he came back a decade later at the age of 38, mostly to earn a little more money. Now he had avenged his defeat, making him both the oldest champion in history and the champion who had gone the longest between heavyweight titles.

Foreman wouldn't hold his title for much longer, as he refused to get in the ring with Tony Tucker and conceded his championship belt. He would continue boxing until 1997, when he lossed to Shannon Briggs in a match that would have given him another shot at the crown, this time against Lennox Lewis. At 48 years old, Foreman at last decided to hang it up. He would never need to worry about money though; his endorsement deal with the "George Foreman Grill" made him millions of dollars and fans more than boxing ever gave him.