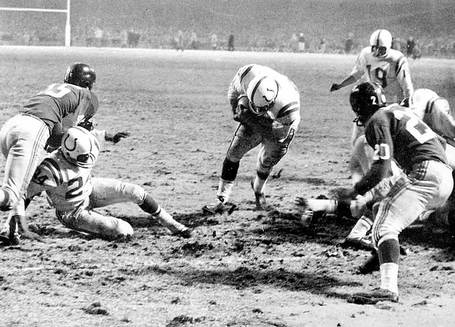 (Alan Ameche scores the winning TD. Photo courtesy of AP Photos) 12/28/1958 - The Greatest Game Ever Played In the first overtime game in league history, the Baltimore Colts defeat the New York Giants, 23-17, in the 1958 NFL Championship Game. The game was played at Yankee Stadium and famously ended on a touchdown run from Colts running back Alan Ameche, who scored from just a yard out. The tightness of the game, mixed with the significance of the teams playing and the 45 million viewers watching on NBC, helped dramatically increase the popularity of the NFL. It is this game, more than any other, that is credited with making the NFL the most popular sports league in the United States. Jack Hand of the Associated Press wrote, "If they play football for 100 years, they never can top the Baltimore's first championship snatched in a sudden death playoff 23-17 after New York refused to gamble." With two-and-a-half minutes to play in regulation, the Giants were holding a 17-14 lead and were on fourth-and-inches from their own 43. Had they decided to go for it, and had they converted on the first down, the Giants likely would have run out the clock. Instead, coach Lee Jim Howell took the cautionary route and ordered his team to punt. The ball was placed at the 14 yard-line with 1:56 to go, setting up Colts quarterback Johnny Unitas, who led the team on an 80-yard drive to put them within field goal distance. Many regard this as the first instance of the "two-minute drill," which had been unheard of 1958. The Colts' drive led to a 20-yard field goal from Steve Myhra, who had missed a short-range kick earlier in the game. Myhra's boot was good this time around and tied the game at 17 with six seconds remaining in the game. Time expired shortly there after with the outcome still undecided. "When the game ended in a tie, we were standing on the sidelines waiting to see what came next," Unitas later recalled. "All of a sudden, the officials came over and said, ‘Send the captain out. We’re going to flip a coin to see who will receive.’ That was the first we heard of the overtime period." The Giants won a coin flip from the officials and started the extra period with the ball. After failing to get farther than their own 29, the Giants once again punted the ball on fourth-and-1. The Colts then finished the game with the drive that set up Ameche's run, leaving the 64,185 fans at Yankee Stadium in shock. Sports Illustrated writer Tex Maule was the first to dub the game "The Best Football Game Ever Played." Because the word "best" doesn't carry the same gravitas as "greatest," the 1958 NFL Championship is generally referred to as "The Greatest Game Ever Played." Although few historian will argue against the deservedness of the game's moniker, many of the players from the game later contended that it didn't deserve the title. In fact in an ESPN.com article written by Eddie Epstein, three Colts players stated that a regular season game against the 49ers from less than a month earlier was a better contest. "I've always felt that it (the '58 championship game) wasn't a real good football game until the last two minutes, and then the overtime," Unitas said. "Just the fact that it was the first overtime in championship play and it happened in Madison Avenue's backyard, that was enough to make people feel they had seen something fantastic. ... They always forget that the month before, in the game we clinched the division and put us into the playoff, San Francisco had us down 27-7 at the half and we came back to beat 'em 35-27. That was a much better game." In 1959, the Colts and Giants once again met in the championship game; the rematch wasn't nearly as competitive and ended in a decisive 31-16 Colts win. Just a year after the 1958 championship, businessman Lamar Hunt launched the American Football League to directly challenge the NFL. The AFL and the NFL would later merge, creating the dynamic event we now know as the Super Bowl. ''You can't overemphasize the dramatic impact of that 1958 NFL Championship Game," Hunt later told the New York Times. "Pro football was just starting to grow. It suddenly had its first overtime game in a championship game with the nation watching on television. I can vividly remember seeing it in a hotel room in Houston. ... In February 1959, the idea formed that there was more than enough pro football interest around the country for another league. The Colts-Giants game had been the turning point in my thinking and awareness." (Steve Mhyra kicks the game-tying field goal. The ball is circled. Photo by Associated Press) 12/28/2000 - Celts win 112-111 on Palacio three There have been a lot of crazy endings to basketball games, but few are as interesting and remarkable as Milt Palacio's against the New Jersey Nets. In a game that the Nets had finally taken control of, the Boston Celtics had trimmed the lead to two on an Antoine Walker three. With 1.8 seconds to go, Nets guard Lucious Harris stood out of bounds at the halfcourt line, looking to inbound the ball. As long as he got it inbounds, the Nets' victory was essentially secured.

Harris, having already used a timeout, tried to force it in to forward Aaron Williams, who was trying to free up Stephon Marbury with a backcourt screen. Williams wasn't ready for it and the ball was deflected off his fingertips and into the hands of Palacio. Milt, who had not taken a shot in the entire game, instantly hurled it at the rim from thirty feet away, with Marbury all over him. The shot was good, and Palacio was mobbed by his teammates.

Harris, who regretted throwing the pass into the Celtics' backcourt, was devastated and said it was the worst moment of his professional career. Palacio, who on the flip side had just experienced the best moment of his career, said he didn't even see the ball go in. "I just released it and I was just trying to catch myself and when I looked over I saw Paul (Pierce) charging at me, so I said 'OK, then it must have gone in.' " (Packer fans mock the 0-16 Detroit Lions. Photo by Jonathan Daniel, Getty Images) 12/28/2008 - The Lions go 0-16 2008 was a dreadful year for the city of the Detroit. Not only did the big three auto makers struggle to stay afloat during the ravaging economic recession, the Detroit Lions finished their season with a ten-point loss to the Green Bay Packers. With the defeat, the Lions became the first team in NFL history to lose all 16 of their regular season games. They were the first time to compile a win-less season since the 1976 Tampa Bay Bucaneers, who in their expansion season lost all 14 of their games.

With the most losses ever in a season, the Lions carried the burden of having the worst season in NFL history. In their historically bad year, the Lions allowed an NFL-record 32.3 points per game as well as 404.4 yards per game. Head coach Rod Marinelli was fired less than 24 hours after the season, while the team redesigned its logo in an attempt to signify the turning of a new page.

Afterward, the question on everyone's mind was if the '08 Lions were really worse than the '76 Bucs. Factoring in that Tampa Bay also lost the first twelve games of the '77 season, running their losing streak to 26 games, most tended to side with the Bucs. Plus, the '08 Lions may not have even been the worst team in the NFL. The 2008 Cleveland Browns, who went 4-12, gave the 4-win Cincinnati Bengals half of their victories. They lost their final six games of the year without producing a single offensive touchdown (which had never been done before), and they lost the final game of the year to the Pittsburgh Steelers (who would win the Super Bowl) by the score of 31-0. In that game, the Browns, on their fourth quarterback of the season, had Brad Gradkowski playing at quarterback. Gradkowski would finish the game with two interceptions, no touchdowns, 20 total yards, and a comical 1.0 QB rating.